Here at HawkWatch, we are working on several Golden Eagle projects (i.e. https://hawkwatch.org/our-work/west-desert-raptors) and I thought I'd share a tidbit on one aspect of a particular project, which is ageing Golden Eagles to a specific year.

Ageing Golden Eagles can be tricky because the amount of white in the wings varies in extent until adulthood when the white is absent, and wing molt can be difficult to assess without lots of practice. So, the best thing to key in on is the tail pattern and tail molt. Using the tail to age Golden Eagles is often much easier and more accurate than using overall plumage or wing molt (remember this!). One thing to know is that all 1st-year (white base with dark tip) and sub-adult tail feathers (white base with dark tip intersected by a narrow, wavy gray band) have a white base, but 1st-year wing feathers with a white base are replaced with a sub-adult feather that may or may not have a white base. This can make birds of the same sub-adult age (2nd-year to 4th-year) look very different from one another. For instance, two 3rd-year birds can differ in the amount of white they have in the wings and vary in the amount of years they take to become fully dark underneath. However, their tails will be very similar in appearance from 1st-year to adult plumage. Of course be careful of birds with fully adult tails that have one or two secondaries with white at the base. In these instances, the tail has been fully replaced during the latest molt, but the wings are one or two feathers behind. This occurs typically in birds that still have extensive white in the sub-adult remiges (secondaries and primaries), and take a bit longer to appear all-dark in the wings than some other Golden Eagles.

One more thing -- 2nd-year birds sometimes have only one or two tail feathers, a few inner primaries, and minimal body feathers replaced, looking nearly identical to 1st-years, so beware of scrutinizing every eagle. Anyway, here are a few tails to check out, the first two birds are 2nd-years (note the several new sub-adult feathers on the first bird but the second bird is only molting one tail feather), the 3rd bird has molted three times showing a mix of adult and sub-adult tail feathers making it a 4th-year; 3rd-year birds have a mix of 1st-year and sub-adult tail feathers, with an adult central tail feather at times. And the last bird is an adult, but don't be fooled by that "slash" of white at the base of one of the tail feathers - adult GE feathers can still have a bit of white near the shaft (as can other species but often only seen in the hand). Anyway, I don't want to overwhelm anyone with too much information or variation, but hope this is informative and a good reference next time you see a photo of a Golden Eagle or are lucky enough to handle one. 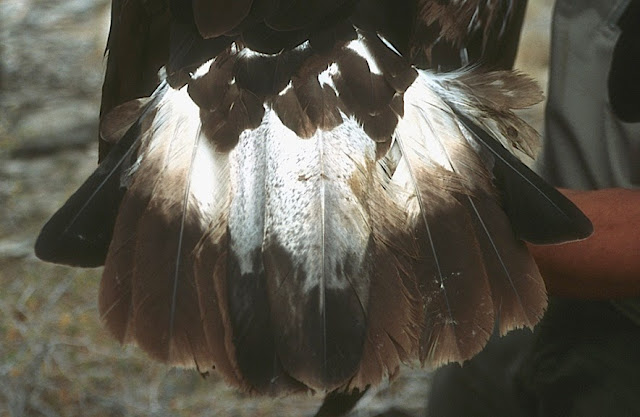 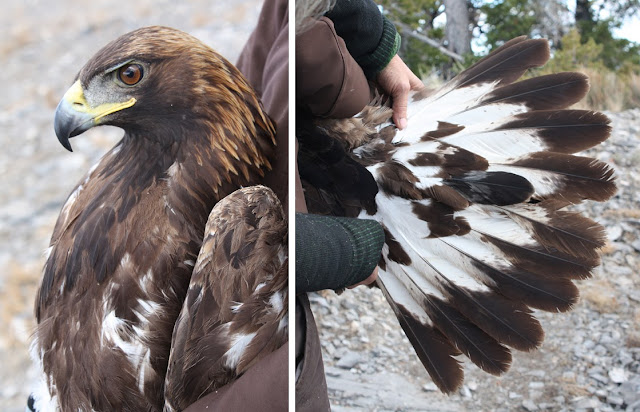 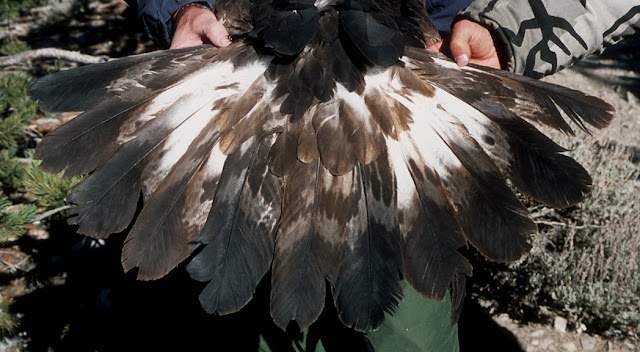 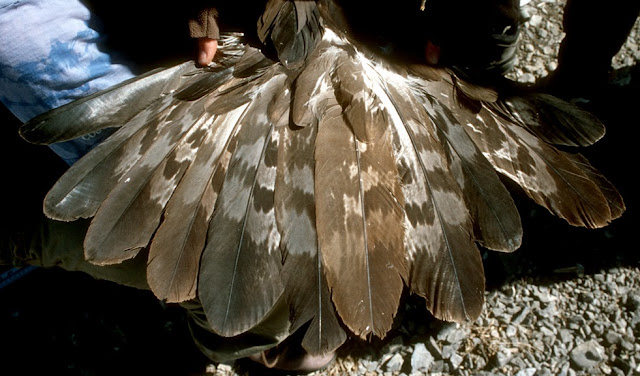